Info courtesy: Self-awarness of the Net
Posted by M Taher at 5:57 PM 2 comments: Links to this post

When searching for images, the Internet is often the first and sometimes only research resource for scholars and educators, but many open-access digital image collections are part of the deep Web, keeping important visual content out of a search engine’s reach. In recent years, libraries, archives, and historical societies across the United States have created rich online visual resource collections that include a wealth of subjects and media formats. Researchers now have access to millions of primary materials from any Internet-accessible computer, which would otherwise require an in-person visit to the physical collection. Read more
Info courtesy: Dr. John Jaeger

Posted by M Taher at 1:02 AM No comments: Links to this post

The Informational Distance Between Cities 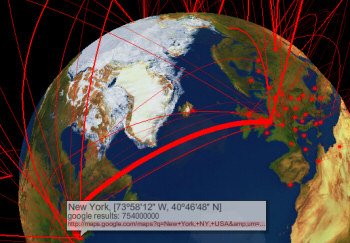 Information Aesthetics points to an interesting visualization of the "informational" relation between cities. Two cities are "informationally" related if they are often mentioned together, so the visualization uses the number of Google results to approximate the distance:
Gdistance(w1,w2) = (#(w1)+#(w2)) / (#(w1+" and "+w2)+#(w2+" and "+w1)),where #(w) is the number of Google search results for the query w enclosed in quotes.
continue reading (also see the comments from the site visitors)

Walk the Talk With Dr. Edward de Bono and get one-minute primer on the six hats

Edward de Bono, Thought Guru makes people not only think about how they think, but also use new ways of looking at things to invent products, find solutions to persistent problems, and resolve conflict. In an interview with The Indian Express Editor-in-Chief Shekhar Gupta on NDTV 24x7's Walk the Talk, Dr de Bono talks about some of his thinking tools, how his training in medicine helped him arrive at some of his concepts, and about his meetings with Rajiv Gandhi, Dr A.P.J. Abdul Kalam, and Pervez Musharraf.

Extract: If you give computers to young children, they start to believe that you don't have to think, all you have to do is search, and you'll find the answer. So, using computers is excellent, but you need, at the same time, to think. Now that extends beyond school. I've worked with major corporates throughout the world and they develop a habit of saying, 'Put all the information, all the information or data, into our computers, and our computers will analyse the data and that will set our strategy, make our decisions.' Very dangerous. Because unless you can look at the information in different ways, you are not going to make progress. And that's happening worldwide with the biggest corporates.

You know something interesting about Islam? The Prophet Muhammad had more to say about thinking than any other religious leader.
•In the Hadith, he says, 'One hour of thinking is better than 70 years of praying.' He says, 'The ink of a scholar is more holy than the blood of a martyr.' He says, 'One learned man gives more trouble to the Devil than a thousand worshippers.' That's Mohammad. In the Koran there are 130 verses about thinking. So, actually, when I go to the Middle East and tell them this, they don't know.

Give me a one-minute primer on the six hats. How does it work?
... So the six hats separate out the thinking. Under the white hat, everyone is looking for facts, information, what we have, what we need, what questions have we asked, how do we get the information. Red hat: permission to put forward your emotions, your intuition, without having to justify or explain it. Black hat is critical: what is wrong, the risks, the downside, why it may not work. The yellow hat: values, benefits. The green hat: creative, new ideas, possibilities, alternatives and so on. The blue hat is the organizing hat: summary, outcome. The point is everyone is wearing the same hat at the same time. That's parallel thinking. That's important. Let me give an example. In a normal meeting, we may have someone who is against the idea being discussed. Normally, that person will spend the whole meeting attacking the idea. With the hats, under the black hat, he or she will be encouraged to be as critical as he or she can possibly be. Then, when it's the turn of the other hat, he's expected to look for value. And if he says, 'I can't see any value', and everyone else is seeing value, then he's seen to be stupid. So everyone is challenged to use their brain fully. continue reading