Note: * * * Here is an article using the techniques of citation analysis. By implication, is very similar to  a visualization of Dr. SR Ranganathan's idea plane!!!.Here is one sample of citation analysis, visualized as Dr. SR Ranganathan's idea plane!!! (more this here). Co-incidentally,  Ranganathan's colleague, Dr G. Bhattacharya (@ DRTC), developed the idea of popsi (Postulate-based Permuted Subject Indexing), and the following image and article appear in a journal Popular Science, whose acronym is popsci.***

'How scientific concepts rise and fall,' By Katie Peek

On the same shelf:

Posted by M Taher at 1:16 PM No comments: Links to this post

Comparing Indian states and territories with countries An Indian summary Which countries match the GDP and population of India's states and territories? How big is Uttar Pradesh, India's most populous state? One way of answering the question is to take its total area: 95,000 square miles (246,000 sq km). Another way is to think of it as a country. If Uttar Pradesh were to declare independence, it would be the world's fifth most populous country (as the map below shows, it has about the same number of residents as Brazil). Yet its economy would only be the size of Qatar, a tiny oil-rich state of fewer than 2m people. That makes it poor on a per person basis. Despite India's two decades of rapid growth, Uttar Pradesh's GDP per head is close to that of Kenya. The map below presents country equivalents for India's states and territories in terms of GDP, GDP per person (in PPP terms) and population. Please play around with it and tell us what you think.

PS. Click on the image to go to the dynamic visual map @  The Economist

Posted by M Taher at 12:42 PM No comments: Links to this post 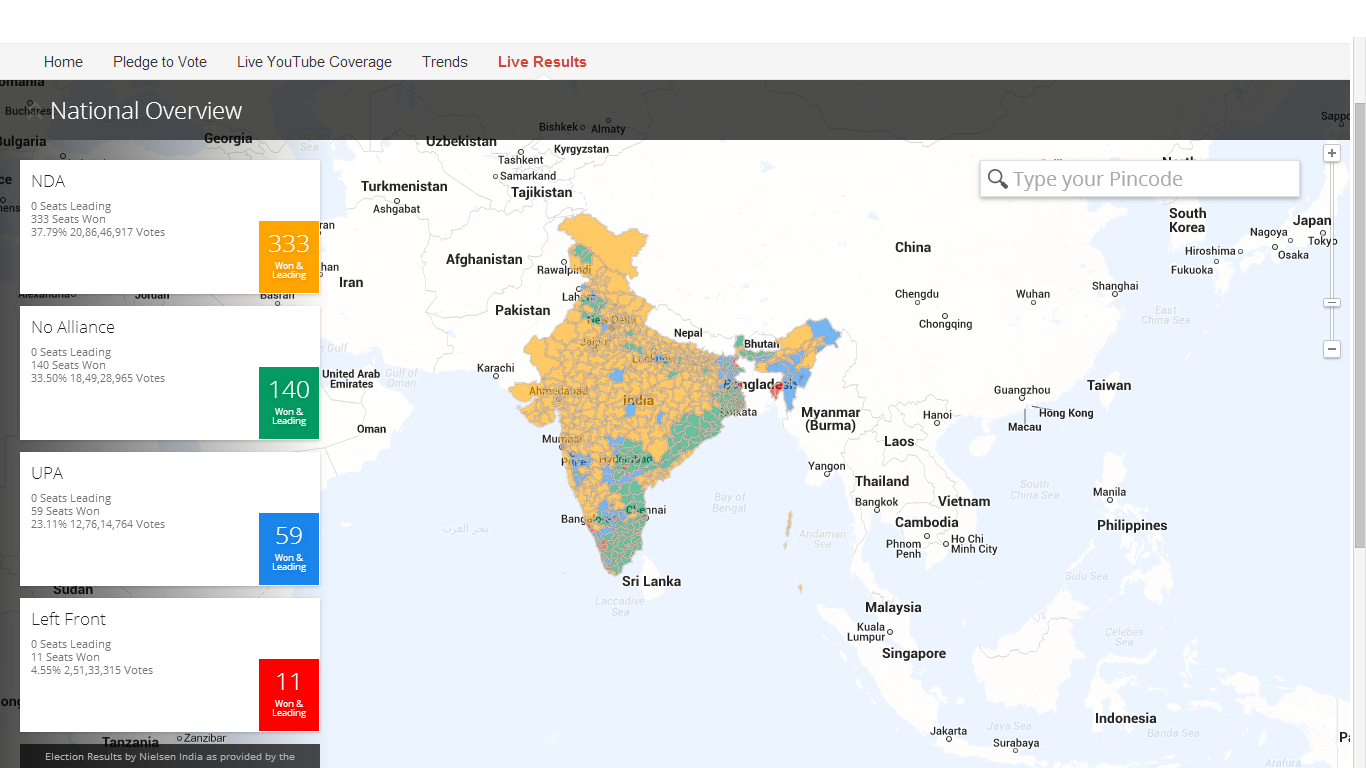 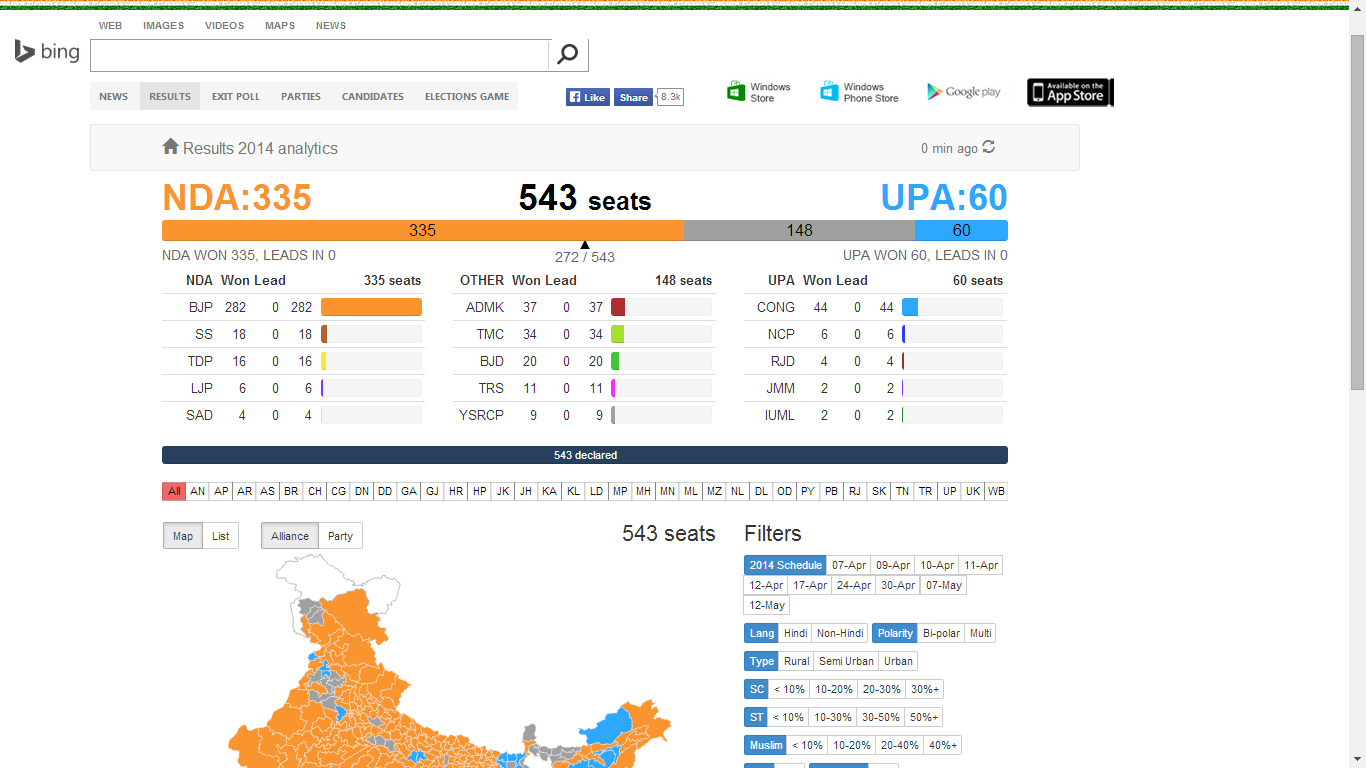 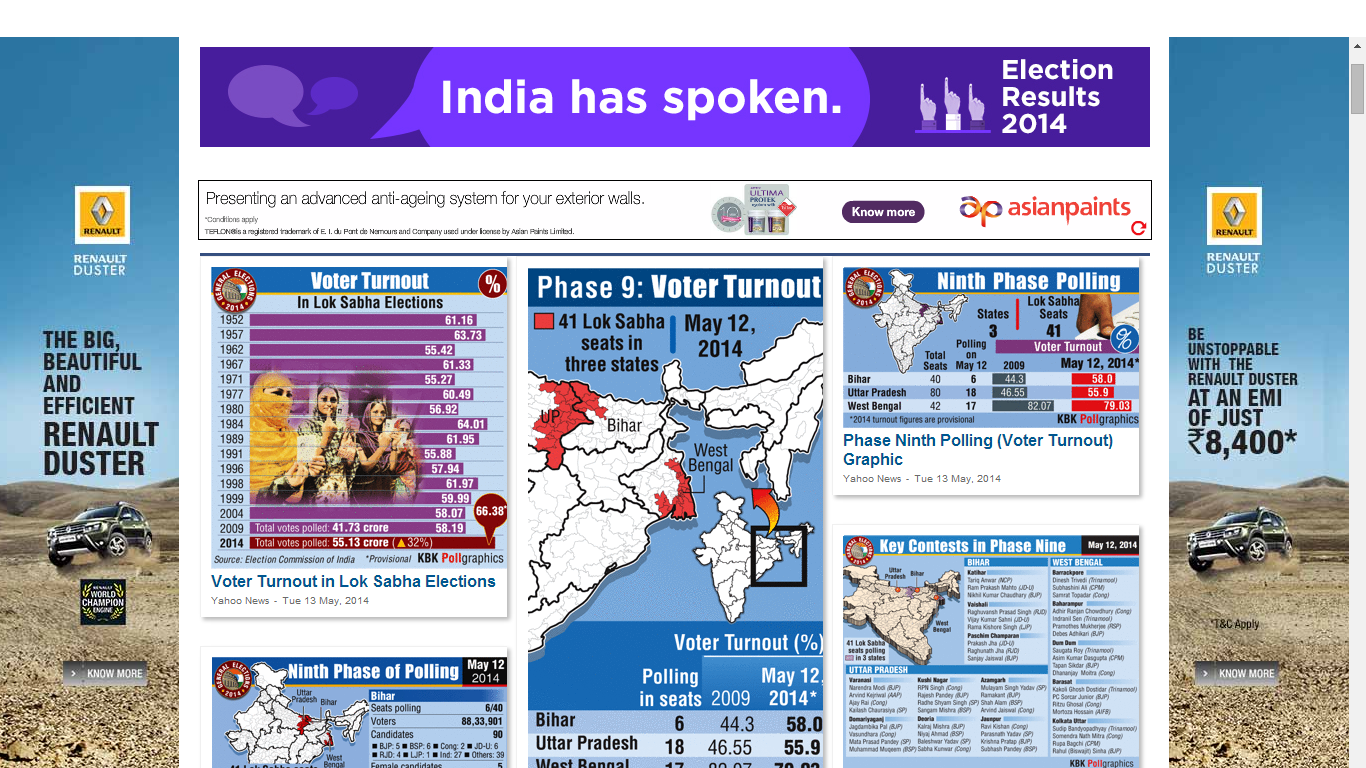 On the same shelf:

Posted by M Taher at 3:10 PM No comments: Links to this post

Mapping the Largest Hip-Hop Vocabularies of Rappers, by Brian Heater New York-based designer Matt Daniels crunched the numbers on a list of 85 rappers to find which emcee has the largest vocabulary in hip-hop. The dataset was culled from the first 35,000 lyrics of each musician’s catalog taken from the website Rap Genius, so as to the level the playing field between newer and older artists, a number that comes out to around three to five albums worth of music. For context, Daniels also included the famously verbose Moby-Dick and the works ofShakespeare as benchmarks.   continue reading
Posted by M Taher at 12:24 AM No comments: Links to this post

Email ThisBlogThis!Share to TwitterShare to FacebookShare to Pinterest
Labels: Vocabulary

Map of World's Evolutionary Tree of Myth and Religion ... by Simon E Davies, The Human Odyssey

Note about this Infographic: * "A wonderful Map of World Mythology from Simon. There are still some corrections to be made and will be brought out in the next version." Mythology *

Since the dawn of mankind, humans have tried to make sense of their world, especially when faced with unknown phenomena such as 'what causes storms', 'what happens to us after we die', and 'why to the planets move through the night sky'?

As homo-sapiens developed the ability for cognitive thought, so too did the first signs of religion seem to arise. The earliest evidence of a religious practice can be traced back 300,000 years ago when we began to bury our dead. Although we cannot define this as the origin of faith, it does suggest that at the dawn of humanity, we had begun to consider some kind of afterlife.

Over time, this religious practice gave rise to a new ideology which spread across the continents, known today as ‘Animism’. This emerging faith was the root belief system that would evolve and branch out into numerous other ideologies all over the world. The journey of these evolving religions can be broken down into five core stages:

Humans began to believe that natural constructs (e.g. plants, animals, rocks and wind) possessed a spiritual essence. These spirit entities were believed to have powers and temperaments that influenced our everyday world. By worshiping these divine beings, it was believed we could maintain harmony with this spirit world and gain favors from them.

The roots of Polytheism seem to lie in the Proto-Indo-European traditions. It seems likely the generation of new Gods were adopted from the nature spirits of the old world (giving abstract beings of thunder and Earth a more human form). During the Neolithic revolution, civilisations began to emerge requiring new areas of expertise (e.g. lawmaking, metallurgy, agriculture and commerce). It was the Indo-European Gods who took on the role of guide and leader to the civilised world.

Typically these divine beings were divided into several classes, overseeing the heavens, the mortal realm and the underworld. Each deity possessed their own powers, religious practice and domain (e.g. trading, diplomacy, warcraft etc). Man could either worship one or all of these beings, gaining favor from them via offerings, prayer and even sacrifice.

In the Bronze Age, a new movement took shape that prioritised one God over all other deities. This system is known as Monotheism - a belief in one supreme being. In 1348 BCE, the pharaoh Akhenaten, raised a lesser known God called 'Aten' to supreme status, downplaying the role of all other Egyptian deities. A little later in Iran, Zoroaster (a Persian priest) claimed 'Ahura Mazda' to be the one supreme deity. This newly emerging system posited that one creator god had formed the known universe, and was totally self-sufficient, capable of ruling over all other domains. This idea became prominent in Judaism, Christianity, Islam, and Sikhism.

Most monotheistic systems tend to be exclusive in nature, which meant the gods of the Old world had to be purged from mans consciousness. As a consequence, monotheistic religions displayed less religious tolerance than polytheistic religions, resulting in many wars and political disputes.

During the Iron Age, many scholars began to question the faith systems of their day. Rather than accepting a religious view as the definitive answer to reality, they began to question the nature of the divine. These probing minds inspired a philosophical movement that swept throughout the old world (often ascribed to the Greek thinker Pythagoras). Great thinkers like Lao Tzu, Epicurus, Confucius and Hypatia were in pursuit of the ultimate, spiritual truth which included a desire to understand the laws behind reality.

What set these philosophers apart from other religious systems was the fact that they emphasised the use of reason and critical thinking over faith. In philosophy, something is considered true only if it is completely proven true on a long term basis by means of reasoning. If not, then it can not be considered the ultimate truth.

However, the Biblical worldview held sway for over a thousand years, ridiculing many philosophical truths as bordering upon blasphemy. Copernicus and Galileo the two foremost casualties of theological interference, with Galileo placed under house arrest by the notorious Inquisition. But all this was soon to change.

Over many centuries, philosophical questioning and testing gave rise to a new movement - known as the scientific revolution. A school of scientists believed that reality should be allowed to speak for itself, removing the subjectivity of human imagination and superstition.

The basic procedure of the scientific method was to explain a phenomenon using a hypotheses, and then designing a series of experiments to test this hypotheses. By repeating these tests, the validity of this theory would be revealed (determining it as either fact or fallacy). Such tests have given humanity an objective and profound insight into the workings of the universe.

This radical ideology quickly spread across Europe and the America's, introducing new perspectives on the natural world and man's place in it. The scientific revolution challenged ideas grounded in tradition and faith, promoting healthy skepticism and reasoning.

It opposed superstition and religious intolerance, making a long-term impact on the culture, politics, and governments of the Western world. It is considered the best method for making useful and practical additions to human knowledge about the physical world, and has resulted in the technological leaps made since it developed in the 1600's. This includes:

* Copernicus updating of the heliocentric model by replacing the Earth with the sun as center of the known universe.

* Isaac Newton's law of gravity which explained the elliptical orbits of the planets.

* Charles Darwin's theory of evolution by natural selection, which explained that all living things in the world evolved from a common ancestor in the distant past.

"Book binding has seen many variations, from the iconic Penguin paperbacks to highly unusual examples like this from late 16th century Germany. It’s a variation on the dos-à-dos binding format (from the French meaning “back-to-back”). Here however, the book opens six different directions, each way revealing a different book. It seems that everyone has a tablet or a Kindle tucked away in their bag (even my 90 year old grandma), and so it sometimes comes as a surprise to remember the craftsmanship that once went along with reading. Continue reading visualnews.com

Posted by M Taher at 10:06 AM No comments: Links to this post